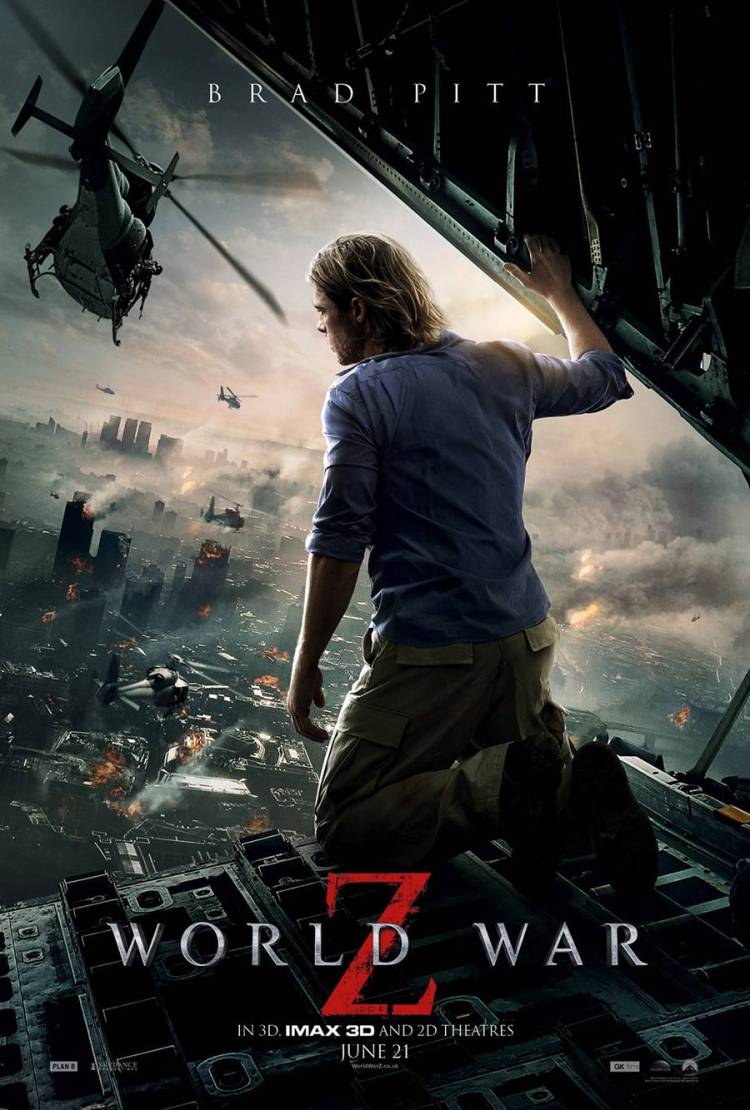 Are they ever going to explain what happened during World Wars ‘A’ through ‘Y’?

Typically, I don’t watch movies more than once.

You might think this strange, but there are still plenty of winners waiting in my unseen ether.

This inventive new take on the zombie apocalypse grips you within the first ten minutes, and never relents.

I’m nearly positive the opening shot is in homage to Dawn of the Dead, but apparently am the only one who’s noticed.

Sure, the CGI’s not immaculate, but that’s nitpickery.

The pacing may slow down at moments, but even the dreamy Brad Pitt (as Gerry Lane) needs the occasional breather. But it doesn’t slow for me; I care throughout the snappy action and all the space between.

Besides. With such a well-rounded narrative unfolding around Mr. Pitt’s international adventures, the audience needs reminding that these great action scenes, take place within a well-thought-out story.

Anyhow. This film has the second best rating: PG-13.

It’s rare to find a movie that veils this deficiency so adequately.

The supporting cast is excellent. There are several characters you grow to love by the end of the film. Although none from Gerry’s immediate family, come to think of it.

Don’t be a square and turn your nose up at WWZ.

It’s not ‘just another zombie movie.’

But spoilers follow; so if you haven’t seen it yet, tear your gaze from this wildly compelling review!

World War Z takes place in several settings across the Earth. Bradley’s pit stops begin after fleeing with his family from Philadelphia to Newark, NJ. Then he journeys alone onto Jerusalem, Wales and finally reunites with his family back in Nova Scotia.

The only real criticism I have is that even after two viewings, I’m not 100% certain why the Jurgen Warmbrunn (played by Ludi Boeken) character’s necessary to the plot.

More specifically, I’m confused about how his position as the ’12th’ man (or the one who must always disagree) on the Israeli council relates to the greater conflict. But honestly, I really don’t care; I’m sure there’s a reason I’m just not seeing.

I won’t go too in depth about the cast, but I think Daniella Kertesz’s performance as Segen, is spectacular.

Not to get too abstract here, but the scene where Gerry severs Segen’s hand, is one of those ‘magical cinematic moments.’ My best description of this emotional swell is ‘breathtaking,’ cliché as it is. But watching that scene I feel extreme tension, elation and a deep appreciation for the writing; all within a short moment.

James Badge Dale as Captain Speke delivers an exceptional performance as well. It gets a little dusty in the theater when his character says goodbye.

The scenes in the apartment complex, the two separate calamities on different runways, the chase through the streets of Jerusalem, the plane crash, the World Health Organization; all are so, so good.

By the way, I hear there’s going to be a sequel?

If so, you can count me in.

But we better find out about the other twenty-five World Wars.