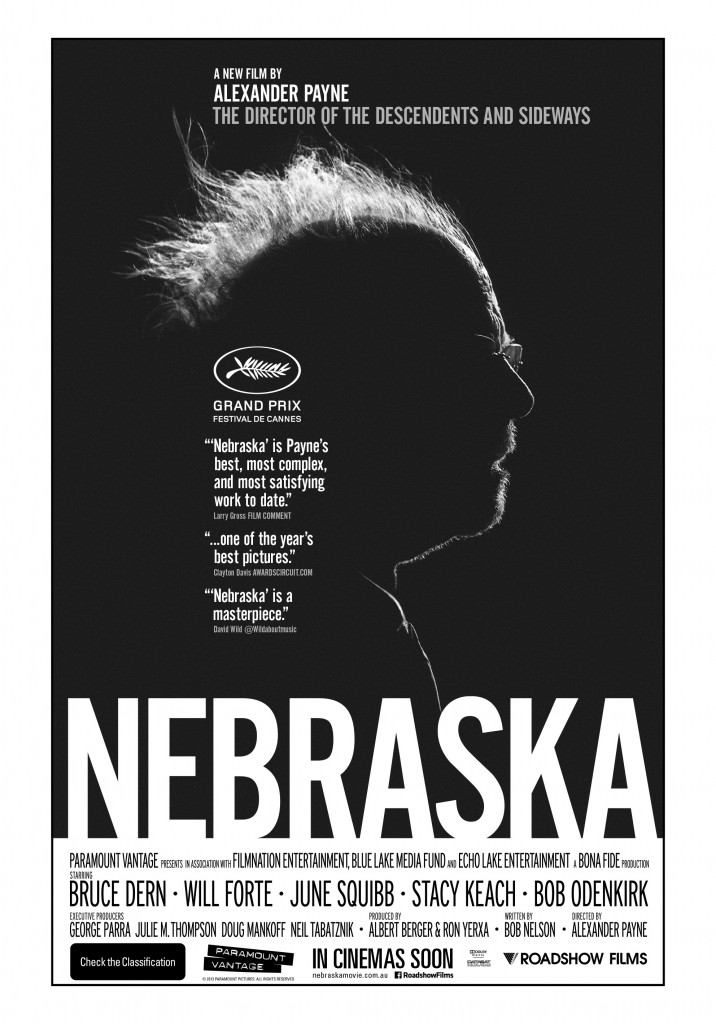 Shot in black and white and given its title, sounds like this one’s going to be a slog.

It’s surprisingly upbeat, at times. And despite the heavy material there are some heartwarming moments.

The humor’s light, subtle and grey, but there’s a handful of laugh-out-loud scenes. The two heavyset thickheaded cousins, played by Kevin Kunkel and Devin Ratray, are hilarious.

There’s a lot of sad dreariness you’ve got to wade through, but hey, it’s about a delusional old man who’s foolishly pursuing a fake million-dollar prize. It’s one of those films, but it’s pretty good!

If you don’t see a lot of movies, this isn’t a high priority on your list. It’s not a boring story; it’s dull subject matter woven into a compelling narrative.

Will Forte, Bruce Dern, June Squibb, Bob Odenkirk and Stacy Keach are all great in this movie. The acting’s seamless through and through.

The plot is occasionally frustrating, because everything that seems to go right is diminished by the events that follow.

I like Nebraska, there’s some funny stuff in here.

I buy into the story, and am content enough to be watching it, but feel like I’m grasping for reasons I enjoy it.

I really like the score for the first half of the movie and grow quite tired of it by the end.

This material doesn’t get me going though. I don’t really enjoy watching the sad inevitabilities of existence.

“But Steve! It’s real life man. It accurately depicts the way things are in reality.”

Seriously though. Along with Amour from last year, August Osage County and this, the sad realities of elderly life are really getting pushed hard at the Oscars.

I’m not sure why Nebraska’s up for Best Picture. It’s not nearly such an egregious error as August Osage or Gravity though.

This is a good enough movie with strong performances from a talented cast, and decent laughs.

Don’t rush out and see it.

But if you like to see all the worthwhile Oscar nominees, Nebraska should be on your list.