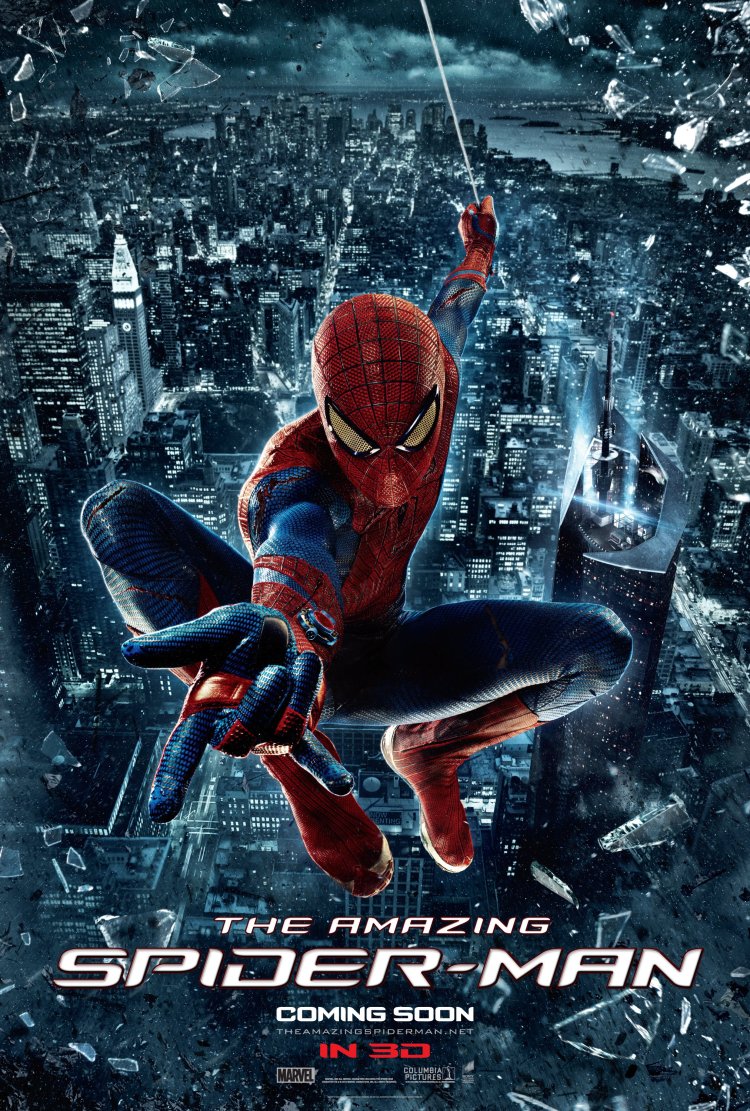 I often wonder if I’m the last in a dying breed. As a teenager, I bought the bound volumes of The Amazing Spider-Man and read Nos. 1 – 40.

Years later I’d purchase the DVD box set of the 1967 animated television series. I watched about half the episodes because they start to get repetitive. Although it’s pretty good, I’m convinced the popularity of the show was largely increased by the catchy, swingin’ theme.

I remember my sole regret back in 2002 upon our introduction to Tobey Maguire as Peter Parker. My greatest complaint about Spider-Man was the discovery of an innate ability to produce webbing. In the illustrated series, he constructs the web-slinging wrist devices himself.

This may appear inconsequential.

But part of the brilliance in the original writing shines through in Peter’s ability to adapt. It is the intelligence he brings from being a bookworm, combined with the radioactive agility and strength, which allows him to make use of devices like the ‘web-shooters’.

Only when the two collaborate (with Peter developing a mental innovation to remedy the physical conflict), does he transition from hero to superhero.

In the literature, Spider-Man develops a utility belt with extra compartments for web cartridges, spider tracers, his camera, and a buckle which functions as the spider signal.

Batman was created in the 30’s; the first issue of The Amazing Spider-Man was released in 1962. I don’t know for certain but on top of other obvious similarities, the Spider-Mobile (a dune buggy which proves more trouble than it’s worth) pushes the supposition over the edge. It seems like Stan Lee wrote the illustrated seriesin response to DC Comics’s caped crusader.

Here’s the basic formula of each issue: Peter’s living life, a super villain with complex motivations shows up and reigns momentary terror. Spider-Man grapples with his new enemy to no avail. Meanwhile the conflicts of superhero life metaphorically resonate with the trials in his unmasked existence.

And then it would take a combination of his Spidey abilities, and the formation of a plan (with potentially a new gadget for the belt) to bring the super villain to justice.

This movie is misleadingly named because it’s based off the “Ultimate Spider-Man” comic series. I won’t get into the bevy of frustration that comes along with that.

In The Amazing Spider-Man, not only does Peter construct the web-shooters, but also he’s fighting The Lizard (who was an earlier villain than the Green Goblin.) Mary Jane has a different name and hair color however, and J. Jonah Jameson and his Daily Bugle are nowhere to be found.

Peter’s stint in underground cage brawling is also omitted, but it’s handled well because they give it a nod. And to be fair, the first film successfully executed that plot sequence. X-Men utilized a similar plot element as well. I appreciate the writers’ choice to cover new material instead.

That’s just one of many key plot points sacrificed on behalf of the reboot.

First of all, it’s time we retire the whistling teapot from the pantheon of tension building auditory cues. Whosoever utilizes the prop henceforth shall be deemed a hack.

There. It is done!

Stan Lee and Steve Ditko, the original writer and illustrator of the comic series, were brought on to help with the screenplay.

If this isn’t the greatest Stan Lee cameo, I don’t know what is. I’m aware of the hatred for the cameos, but can’t connect with that particular criticism. Seems like a genuinely contrarian concern.

Martin Sheen’s a total chameleon in this movie, I had no idea it was him.

Sally Field, who I didn’t enjoy as Mary Todd Lincoln, turns in an excellent performance as Aunt May.

Emma’s pretty funny. But can’t we call her Mary Jane, and steadily rinse Kirstin Dunst from our memory?

I saw The Bachelorette. It was ungood.

Denis Leary’s okay. He doesn’t have an easy role, but does his best to make it fun.

Andrew Garfield turns in a solid performance. I like his quieter, more hipster Peter Parker. The only place he falls short is the witty banter. Perhaps this is a function of the writing, but Spidey’s jokester attitude’s not up to snuff.

I bring up the following weakness because it’s a bit heinous.

After a stupid scene where Pete gets beat up by Flash Thompson (the worst part of the film although it’s probably not Chris Zylka’s fault) all of the other high schoolers steadily depart.

One random dude kicks Peter’s camera a couple feet across the concrete while he lies beaten on the ground. It’s totally uncalled for and he’s not Flash’s friend. It’s just another guy in the crowd.

Nobody would behave like that! It’s a hilariously bad cherry atop a melted sundae.

There’s a nice little dichotomy to be drawn between Flash and the Lizard.

Speaking of, I’ve got no complaints about Rhys Ifans as the Lizard. Although I wish he’d worn the purple pants.

The CGI’s not perfect but it’s generally very good.

Some plot points have been unnecessarily translated from the first movie. For example, Dr. Connors feels torn between two personalities (he’s even doing the old mirror trick) and the Lizard consciousness encourages mischief.

It’s the reptilian brain after all, so perhaps this is the better context, but the question remains:

Did it have to be the exact same dynamic for the transformation of the super villain?

Again I must applaud the writers for their choice towards the end. There is a small, unexpected moment; a great twist on the classic hero/villain relationship.

If there’s one thing in cinema I despise, it’s bad ADR, and there are a handful of moments where the auditory puppet strings lose translucence.

Most specifically and egregiously, the conversation between Spidey and the criminal in the car underwent tinkering.

The film’s biggest fault is that it’s retelling most of the story from the original. For example, the dynamic between Peter and Uncle Ben is the same. When he scolds Peter about revenge, it’s all too clear where things are going.

My oh my oh my. The Amazing Spider-Man is much too similar to Spider-Man.

I don’t know how to solve this problem, but it certainly points toward a greater truth.

Ultimately, after much research, I’ve realized Sony Pictures is a villain akin to the Lizard. They both have complex motivations; disallowing my complete condemnation.

Sony bought up the rights to Spider-Man during a time when Marvel needed money and was selling brands to different studios. For example, 20th Century Fox grabbed X-Men. After telling a fantastic origin story in the first film, director Sam Raimi followed up with Spider-Man 2; a movie that is widely regarded as spectacular.

Now we arrive at the first of two causes for my ire. I’ll argue with anyone that Spider-Man 3 is a good movie with one horrifically bad scene, and perhaps another shabby one. Part of the reason for a reboot was the increasing animosity between the director and the studio heads. Raimi was pushing for greater creative control in Spider-Man 4, after feeling pressured by the studio to force certain plot points into the third installment.

In my life, there has never been a more highly anticipated movie to be received with such vehement disgust as Spider-Man 3. I didn’t see it until long after its release to DVD. So whenever it arose in conversation, I’d ask if it’s worth my time, and always received a negative response. Not one person recommended I watch it.

Of course I eventually did, and was surprisingly pleased with what I was given. The fights alone are excellent. But that one ‘emo Peter’ scene where he’s walking down the sidewalk, shooting the finger guns at the ladies; is nauseating. It’s a pandering piece of garbage riddled with cliché.

It’s the kind of inexplicable moment that makes you wonder: What kind of self-respecting director would mar his hard work by including such an obvious error in the final cut?

I doubt it was Raimi’s choice.

So my point is, I’m suspicious that Sony is to be blamed for that particularly terrible scene. A scene that unfairly stilted public opinion against the third film. One that hurt the fan boys hardest and ruined the integrity of a promising franchise.

Therefore we get to 2012. If Sony doesn’t produce another Spider-Man film, the rights to the brand will revert to Marvel. Presumably that means Walt Disney Pictures, who also owns The Avengers brand.

Given the way Sony’s handled Spider-Man 3 and The Amazing Spider-Man, I’d have much preferred Disney ended up with the rights.

I can understand Sony’s wish to hold onto the Spider-Man brand. But clearly the series was rebooted too quickly if they wanted to include the origin story.

Perhaps the reboot will continue into excellence, and The Amazing Spider-Man (much like Iron Man 2)will fade along with K-Dunst.

It’s just sad to see a historically beloved and brilliant narrative quickly rehashed like a throwaway piece of ephemera.

It’d be nice if we got a visually seamless film this time around. Come May 2nd, we’ll see how things pan out.

So this ought to be good. Right?