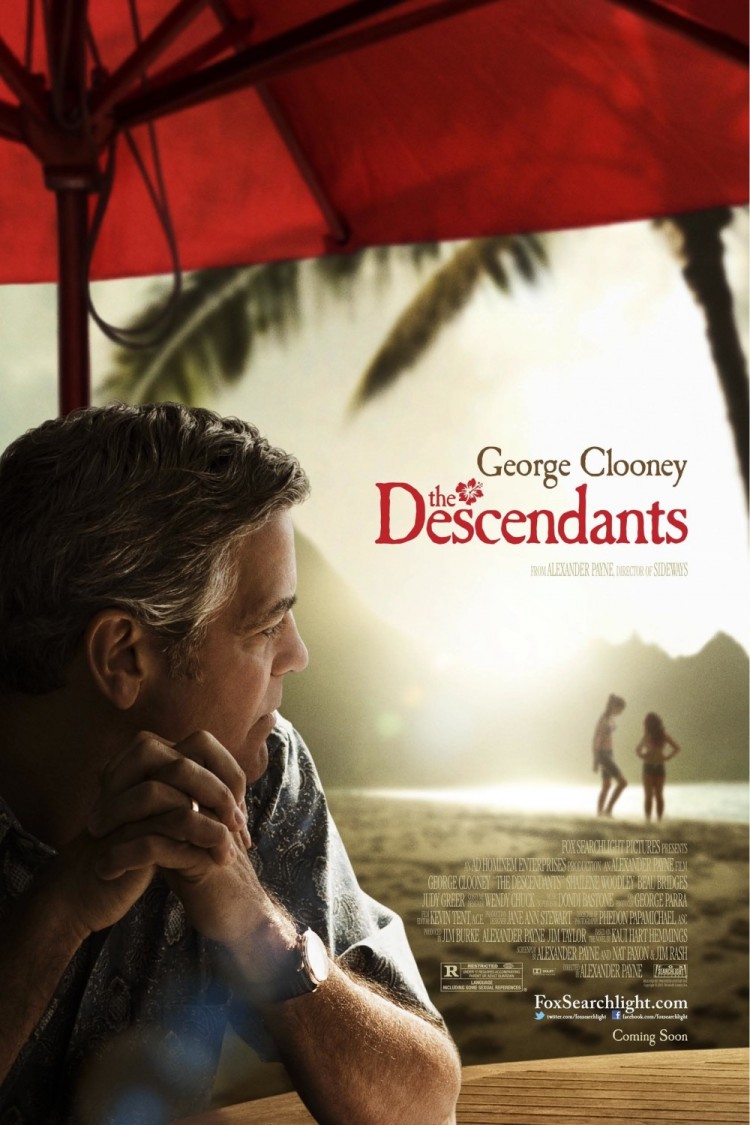 Much like Wes Anderson’s work, I appreciate the look, about 25% of the humor and the smart writing. I also applaud the directors for having a distinct visual style to their films.

After The Descendants I feel the same way I did after watching Nebraska; somewhat disappointed, pretty bored, and uninspired.

The only other Payne flick I’ve ogled is About Schmidt, which I found even more underwhelming than his two most recent works.

What’s good about this movie is it’s subtle, but it’s a long wait and a lot of Hawaiian soundtrack in between each nuance. I think more of the humor is supposed to hit home.

George Clooney’s the best part of this movie.

At the same time, it’s my least favorite film starring the Cloondogger.

This is at least his second time in the starring role where the movie opens with his voiceover. Up in the Air is another.

That Shailene Woodley’s a solid young actress. I dig this chick; she seems very promising.

Shailene delivers just as excellently in The Spectacular Now where she plays a lovable sweetheart. (A great movie by the way.)

Judy Greer is the type of actress you’ve seen all over the place. She plays a hysterical character in Arrested Development, and is all-around tremendous. Hopefully we see more of her in the future.

Payne’s clearly a fan of reversals and double reversals. He likes to build a swell of emotion, rinse it away with a wave of disappointment, and then provide a glimmer of hope through an unexpected and unprecedented character’s behavior.

For example, in Nebraska, against all odds, Will Forte finds Bruce Dern’s dentures lost in abandoned train tracks. When he shows them to his father, Dern claims they don’t belong to him. Eventually, grabbing them, he says, “Of course they’re my teeth.” Up until that moment, we’re given no hint Dern’s character has a sense of humor. A similar exchange takes place when they steal the wrong air compressor.

This type of character interaction recurs throughout The Descendants. For example, Alex’s friend Sid (played by Nick Krause) seems like an oblivious moron. He says something inappropriate to Matt, causing him to pull over the car.

Matt: [to Alex] Your friend is completely retarded, you know that?

Sid: [laughing] Psych! No I don’t have a retarded brother.

Ultimately, I come out of these moments feeling disappointed and unfulfilled. Sure the exchange catches me off guard but that jolt seems to be the end to the means. It happens four or five times. I guess that and the stilted humor are what I essentially disagree with. The shocking reversals and muted humor don’t add up to a great film. (Despite such potential in the story’s framework.)

Krause turns in a solid performance as well, but the scene in which he laughs at ‘Tu-Tu’ feels off.

The character of Scottie (played by Amara Miller) is painful. It reminds me of how I feel about Abigail Breslin in Little Miss Sunshine, another quirkedy with an annoying little girl. I don’t understand the appeal in these types of characters.

When Scottie flicks off the well-meaning guy in the restaurant, is that supposed to be funny? The ‘twat’ scene, the cursing and stupidity? When she’s wearing her sister’s lingerie and dancing poolside? When they have the conversation about the sand in her bikini top?

Are all of those moments supposed to make us laugh? They’re neither funny nor cute and detract greatly from the overall film.

Look. I know every feminist shakes her head at me and replies with some dismissive comment like, “Oh just get over it,” or “Well then look forward to parenthood buddy.” But my criticism is the exact same as it was after Moonrise Kingdom (a Wes Anderson film ironically enough):

It does the male audience a great disservice by having an excess of screen time featuring scantily clad little girls.

Not because of some gross proclivity.

It’s the same aversion I feel to images of male genitalia. Every second it remains onscreen, I cringe into the seat cushion a little bit further.

And I only bring up this natural feeling of discomfort because I think that’s what Payne’s trying to ‘challenge’ (so to speak, I’m using that word loosely). Or he thinks she’s adorable and funny. Either way, I don’t think anything is gained through Scottie’s character.

It’s illustrative of a pattern I’ve recognized in A. Payne’s recent filmography. Going back to the reversals thing, he likes to have women in the polar extremes of age exploring sexual and explicit themes. Just like June Squibb, an older woman, pulling up her skirt in front of some guy’s tombstone. She’s rubbing it in the dead guy’s face that he never got inside her pants. I find that scene morbid and off-putting; not empowering, insightful or worthy of a chuckle.

There’s a beautiful camera shot down a set of hospital stairs, while Matt’s voiceover speaks above the sound of his ascending footsteps. He is heading to find out his wife must be taken off the machines and will soon die.

And the entire movie is a series of sequences; a number of character interactions where others talk down to Matt about his choices. Like the staircase, they can only watch from above, and patronize.

Except the kids, all other characters condescend to Matt, are inconsiderate of his feelings and pride themselves for praising his comatose wife in comparison. It’s mostly a despicable lot he encounters.

And yet he keeps his mouth shut. Towards the end, we see a tiny victory in this choice.

But this ‘glimmer in the darkness’ doesn’t distill the discomforting sadness (and often boredom) one must wade through to get there.

I don’t know. I’m not trying to rain on the Payne parade, but it’s just not my spot of tea.

The Descendants is a good enough movie. I call it ‘good’ because it’s visually stunning, and intelligent. It’s easily watchable, but there’s just a lot of better stuff out there. Especially starring Clooney.

Might I suggest the aforementioned Up in the Air, instead, perhaps?

It touches on a bit more sadness, but it’s just as intelligent plus more captivating and fun.