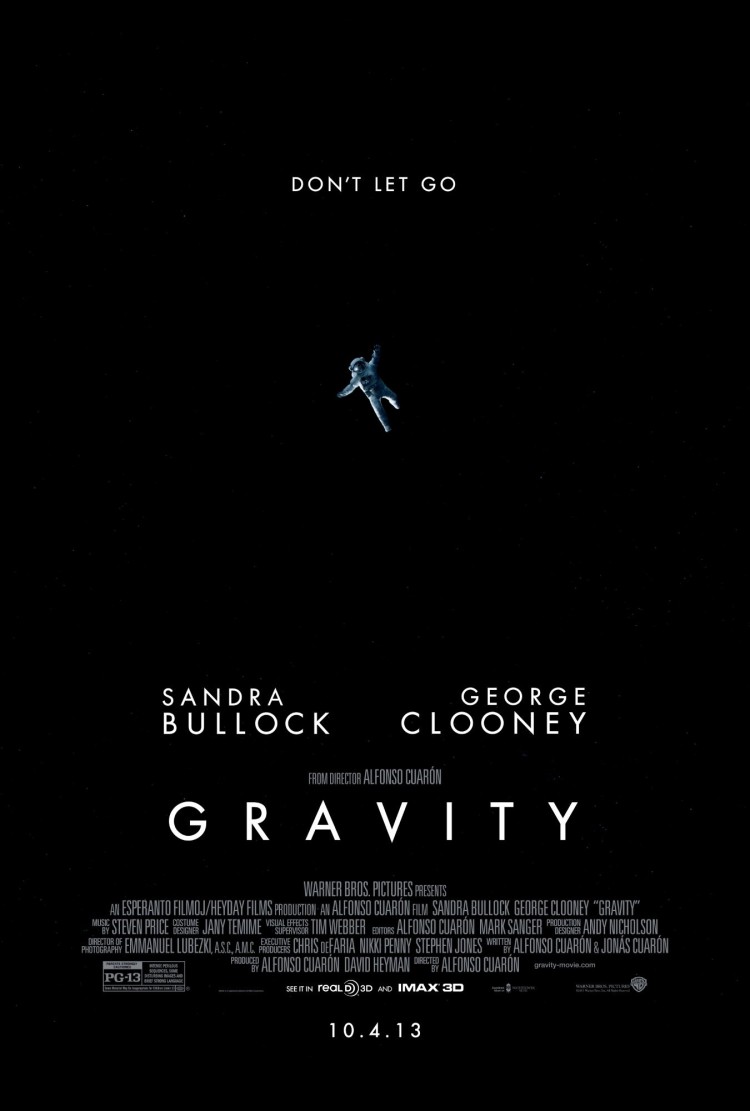 Far and away the most overrated film of 2013.

Sound like I’m jumping on with all the naysayers, but I felt the same about the crummy dialogue long before hearing a critic rave about it.

I don’t have a lot of nice things to say about Gravity. It’s the perfect example of how nefarious the awards system can be, and don’t appreciate the avalanche of critical acclaim it’s received.

Especially when there are tons of better movies from this past year deserving the praise.

Alfonso Cuaron did not deserve best director for this picture, and it’s to the Hollywood Foreign Press’s great discredit that he was awarded the Golden Globe for such a mediocre product.

I haven’t received a legitimate argument for why he won the award, so I’m assuming it has much to do with his ethnicity. Every article I’ve read on the subject, seems to suggest he won Best Director for ‘good reason,’ but then never goes on to cite why.

Because (much like an auteur) he personally wrote, directed and edited his own screenplay? It’s written poorly, and Steve McQueen accomplishes a similar feat with 12 Years a Slave.

I don’t enjoy badmouthing movies. Cuaron worked hard to put this together, and seems like a nice man.

But I have no issue with Cuaron, and appreciate his efforts. I take umbrage with the hype and accolades Gravity has received since its release.

Okay. I’ll talk about the movie for a moment before complaining some more.

I forget where I heard this, but somebody put it perfectly when they said Gravity felt like “it began in act two, and ended halfway through act three.” So if you’re looking for a well-constructed, polished and original narrative, look elsewhere.

If you live under a rock, you mightn’t know it’s ‘visually stunning.’

There are three or four solid moments, where the tension’s high, and the plot stays on a compelling track.

The 3-D is sharp. I honestly have no idea if it’s the sharpest I’ve ever seen, but I don’t “feel like I’m in space.”

That’s bullshit, and I’m sick of hearing people say that.

(Okay, here we go again, beware the spoilers below.)

The four good scenes are thus: 1) the fire extinguisher 2) Sandra flipping end over end 3) Clooney being detached and 4) Clooney’s ghost showing up.

Now. I would rather not lose Georgie boy so quickly. I care zero percent about Sandra’s plight, because I have no investment in her character or conflict. I have no context in which to place this individual, so I’m just supposed to care about her because she’s an astronaut in trouble? That’s a lot to ask from your audience, and it doesn’t make for compelling storytelling.

When Sandra’s finally in a somewhat safe location, I realize I’ve nothing tethering me to her character.

Okay, so she’s safe – what does that mean to me in the grand context of the film? Well, she’s halfway to making Clooney’s self-sacrifice worthwhile.

But all for what? It’s unclear why she’s out there in the first place! What do I care if she gets home?

What’s consequential about her getting home? She survives dull circumstances with nothing at stake. There’s no grand scheme here.

This is what I’m trying to get at, my proverbial audience – this is shallow writing.

For example, if we’d seen Sandy make a costly mistake early on (during the absent Act I, perhaps) we might care about her character overcoming this lack of confidence; these feelings of apprehension and indecision.

Gravity is an excuse to do visual 3D tricks in space, and while that may appeal to some, I much prefer the story come first.

I wish ghost Clooney was really alive, and hitchhiked on the tail of a passing comet. That’s the kind of outer space visual I’m looking for. Now that we’re out here, might as well venture a little further from the Earth’s atmosphere, right?

I heard someone on NPR (I believe) mention how Cuaron’s ability to bring together diverse groups to make this film is to his great credit as a director.

First of all, it’s a movie about two beautiful white people, and that’s it. As noted above, the entire conflict of the movie hinges on your unquestionable compassion for Sandra’s character.

Secondly, how in fuck does this have any bearing on the resulting film that’s produced?

There is zero correlation between a production team’s level of diversity, and the quality of the motion picture.

I find this mildly revolting. Movies’ should not be awarded points for this sort of reason.

Gravity’s mediocre at best, and not worth revisiting for my tastes.

Sorry, Fonso, I bet you’re a good dude, but I don’t love your film.