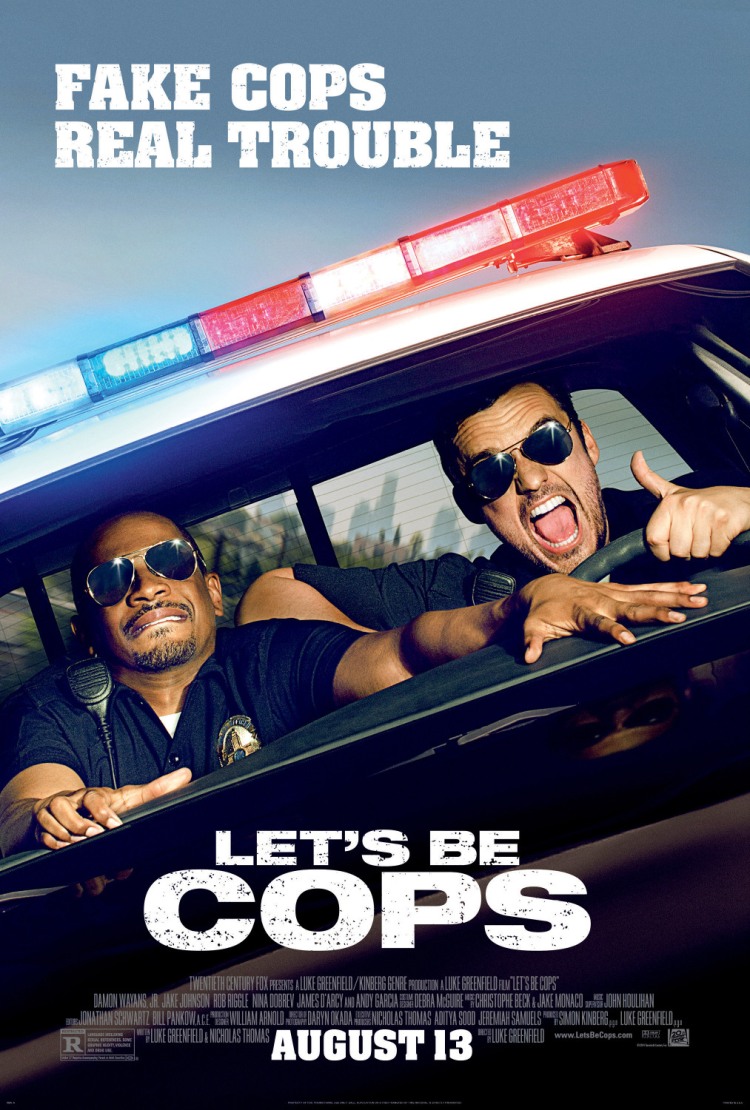 A Wednesday release is odd enough.

But a 12% amongst top critics on Rotten Tomatoes?

Now. Are you sitting down?

When asked my opinion of Breaking Bad or The Wire my response is always the same, “I haven’t seen an episode, but I’m sure I’d love it.”

Folks don’t follow this formula when it comes to New Girl. Blowhards and contrarians delight in its dismissal, but it’s amongst the best comedic series in recent television.

How is this relevant? Those who enjoy the FOX sitcom will love Let’s Be Cops.

The subject matter feels like it’s pulled from the same barrel. The exposition is lightning fast; the pacing and tone are incredibly similar.

For those unaware, Jake Johnson and Damon Wayans Jr. (two lead actors from the aforementioned sitcom) star in LBC. Their characters don’t differ much between the big and small screens.

New Girl fanhood isn’t required to enjoy this movie, but it helps being familiar with their brand of comedy.

It’s a self-aware buddy-cop satire that pokes fun at the entertainment industry.

The problem is the disjointed narrative. From a technical perspective, Let’s Be Cops isn’t a well-made movie.

This is evident from the very beginning: A pillowy introduction in which the protagonists sum up their lives in two sentences. As their conversation winds down, Johnson encourages Wayans to approach a girl at the bar. Just as he’s about to crack, the camera cuts to their curbside lament as the valet pulls up.

It’s very odd. Many of these moments happen throughout.

The film begs quite a lot from the viewer. Johnson is constantly driving across lawns.

It’s poorly edited and directed. The camerawork is incongruous. The plot is thin and absurd, and the set design is by no means elaborate.

Then again, at times, the directing and camerawork are noteworthy. The filmmakers put slow motion to innovative use on several occasions, and social media is creatively incorporated.

None of this matters, however.

Johnson and Wayans are spectacular as a comedic duo. Their banter consists of constantly overlapping hilarities; before one reaches the punch line, the other begins the next quip, visa versa and so on.

The story of this film is like a dense jungle canopy of stupid. Beams of creative light poke through but they are few and far between.

LBC contrasts the ways in which violence is fantasized pop culturally: Through video games, movies, COPS (the TV show), etc.

Each moment attempts to break convention by over-embracing cliché; neo-satire, I call it. A realistic engagement with prototypical formatting.

The supporting cast is strong. Rob Riggle is always incredible and plays a much quieter role than usual.

Keegan-Michael Key is a funny supporting character and Natasha Leggero plays a small, but hilarious part. James D’Arcy does an excellent job as the villain.

One particular line, although hilarious in the trailer, was removed from the final cut, and it’s such a relief.

Stay for the beginning of the rolling credits to view some bonus footage.

LBC may be imperfect but for everything lacking editorially, it makes up in uproarious laughter.

A Million Ways to Die in the West has its peyote scene, Neighbors does mushrooms, 22 Jump Street trips on Wy-Fy (similar to acid) and Let’s Be Cops rounds the summer off smoking crystal meth.

Let’s hope Harry and Lloyd stay away from heroine in Dumb & Dumber To.