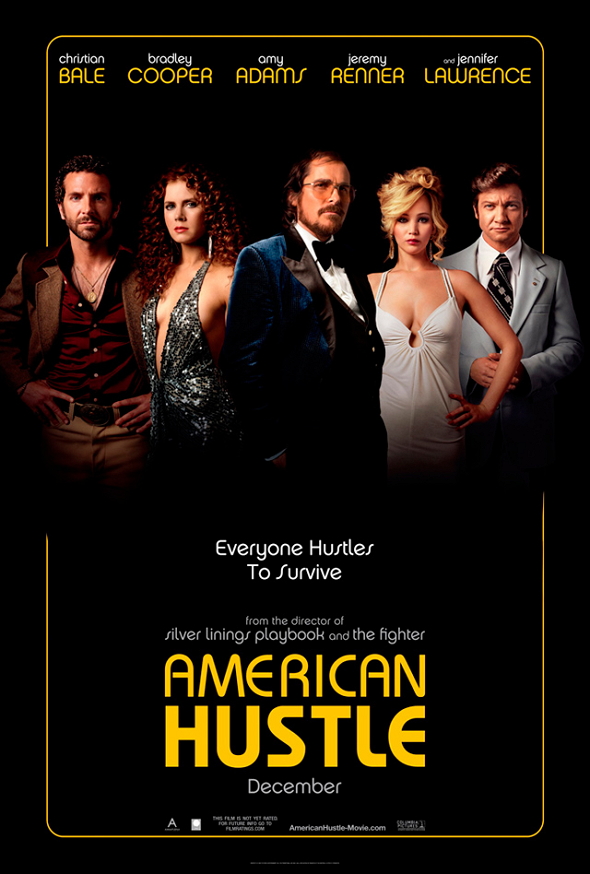 Yes, for God’s sake, I’m aware of the similarities to GoodFellas.

It’s a strange human trait, but if an individual in a group professes love for American Hustle, there’s always that one dude – The guy who believes he’s most ‘in the know.’

Regardless of any real opinions, he’ll say, “Yeah, I thought it was pretty good. But it draws too much from Scorsese’s early work; namely GoodFellas.”

If you hear this in a professional business environment, at home, in the church confessional booth or what have you; I urge you seek out this monster, and silence their blowharding with a crescent kick.

Because David O. Russell’s most recent effort is a spectacular film.

I don’t think I can oversell this character study, with its ten Oscar nominations and three wins at the Golden Globes.

One is for ‘Best Comedy or Musical.’ Here’s a diabolical scheme waiting to hatch: Remake The Producers (again) and secure a nomination for this award. No matter what the competition, it’d have to win by default, no?

As it pertains to performance in film, those were three of the most deserved awards distributed for the previous year.

I walked into the theater with my nose held high in the air. The movie looked overwrought with cliché, but I had seen the trailer several dozen times.

Plus, I was only familiar with one David O. Russell film by then; Silver Linings Playbook. For further reading on my historic disappointment in SLP check out my review.

(I caught The Fighter a month later; solidifying my certainty in Davey Russ’s directing ability.)

If you haven’t seen American Hustle, it’s #2 on my ‘Best Films of 2013’ list, so go into it with reasonable expectations and you should be swept away.

What else can be said? It’s a great movie that’s sure to delight.

So if you haven’t seen it and you’re sensitive to potential spoilers, stop reading now.

There is plenty of material up for discussion surrounding this film. For now, I’ll focus on several plot aspects I found noteworthy, and then talk a little smack about Jared Leto, before wrapping things up.

Jeremy Renner, who deftly performs a tense unfolding of his character’s arc, plays what is potentially the most compelling role, Mayor Carmine Polito.

The opening title card before Fargo, the Coen brothers’ film, is a comedic take on a common trend in modern movies. The appearance of the words, “Based on a true story,” is a complete red herring. Fargo’s entirely fictional!

David O. throws his hat in the ring with another satirical take on the opening title card. At the beginning of Hustle the words read: “Some of this actually happened.”

The message triggers a hearty laugh, and it’s a great reveal (especially being unacquainted with the story’s connection to reality.)

As I mention in my review of Elysium, the ‘parable’ is a prolific plot device often utilized in a clumsy fashion. Therefore, it often comes off as cliché or contrived. Neill Blomkamp avoids this by having the protagonist interrupt another character’s allegorical narrative with a summary of the conclusion. (To astounding effect, I might add.)

While it serves to reveal subtle character traits, it’s also a brilliant and original take on an ancient plot device.

That’s a dumb joke but the sentiment towards BC retains credence. On top of his roles in Wedding Crashers and The Hangover, Brad’s shown impressive villain chops, and we should all appreciate him a little more next holiday season.

Cooper, and by the same token Michael Fassbender (for 12 Years a Slave), were snubbed for the Best Supporting Actor Award.

But not to worry, because Matthew McConaughey, a handsome straight Caucasian depicting a character of similar description, will be winning an award, so they’ve reached their limit on that demographic.

I’m reminded of an award season several years ago, when Milk was getting a lot of press. Okay, yes, Sean Penn depicts a convincing portrait of a gay man. But the movie’s boring! (And, side note, Harvey Milk wasn’t the greatest guy in real life.)

Jared Leto (whom I don’t mean to criticize, unless we’re talking about acceptance speeches) did a fine job of depicting a transsexual. But I found his character enormously off-putting, and as much I appreciate the effort that went into the performance, Leto just doesn’t do it for me.

But that’s DBC, not the hustling Americans.

Ready for a strong opinion?

All of the cast’s main players are wildly prolific in modern cinema, and judging by their performances in previous films, are among the most talented actors working today.

Every single performance I’ve seen by Christian Bale, J-Law, Coop-A-Loop, Amy Adams, J. Renner and Louis C.K., has been spot-on, nuanced and (for all intents and purposes) near perfect.

If that doesn’t tell you anything about this film, nothing will.

Go out and catch American Hustle before it loses its crispy freshness! 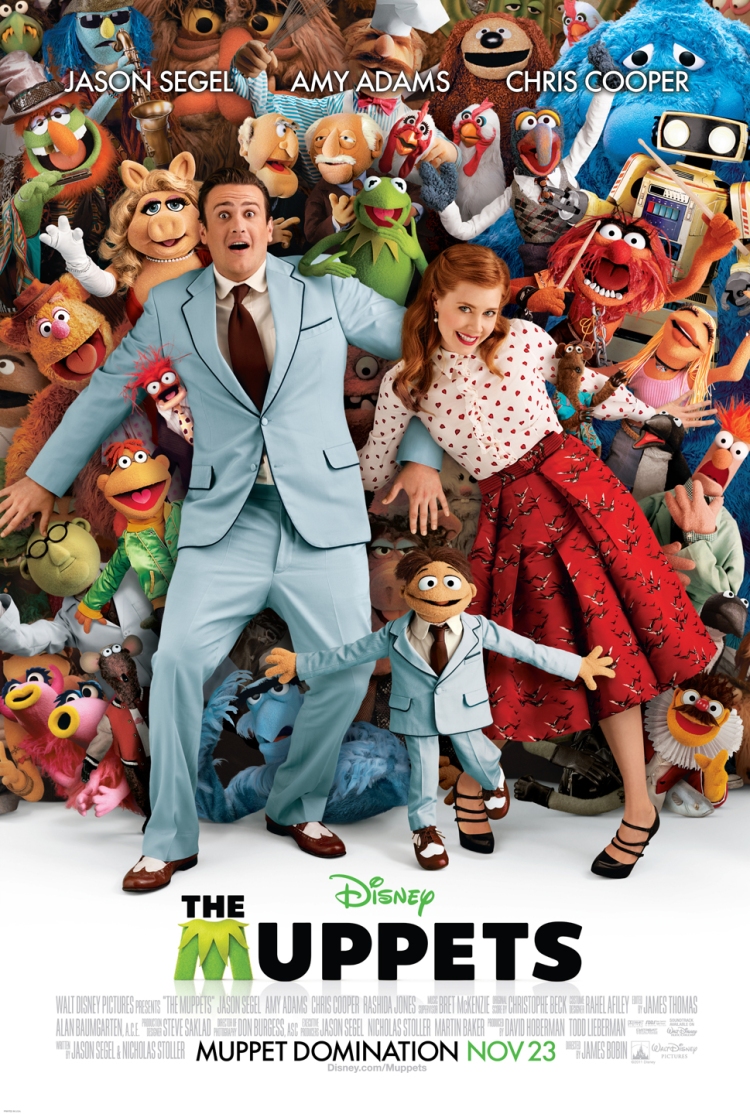 Where’s the line between Man and Muppet?

My recliner’s dusty, because I was tearing up something fierce during The Muppets.

I know I’m a hardcore softy, but I was really touched by this movie.

The Muppets, as always, is a self-referential tale. The plot reflects the current state of the Muppet tradition in reality.

The last time Jim Henson’s puppets had an adventure was back in 2005, with a movie I’ve never heard of. The Muppets’ Wizard of Oz stars Ashanti, Queen Latifah and Quentin Tarantino; one of the most baffling casts in an apparent attempt to retell the classic tale in an African American context. It was clearly a major flop.

This current escapade is their attempt to revive the classic mode of storytelling.

What’s most fascinating about this franchise is its own brand of narrative. It’s a cast of characters that a large audience feels nostalgia for. And it’s a romp through self-awareness. The plot (although particularly strong in this feature) is almost inconsequential because it’s just another mode through which the Muppet experience is retold.

I think it’s rare we get to see the full performance of The Muppet Show. By this film’s end, it delivers the whole shebang-a-bang.

Jason Segel plays a big part in getting this film made, because he not only stars, but also is the top-billed screenwriter (besides Jim Henson.) The puppeteer died in 1990 at only fifty-four years old, so it’s doubtful he had a hand in writing this screenplay. But it’s nice to see them remembering his name.

Henson produced a philosophical teleplay in 1969 titled The Cube. It’s tells a smart and funny story in just under an hour and is worth a watch. (It’s online, you’ll find it.) But he wrote, directed and produced all sorts of stuff, like The Cube, which are both brilliant and completely devoid of puppets. He was a true talent that passed before his time.

Also starring in the film is Amy Adams, who may be the best actress working today. She’s top three for certain (along with Jennifer Lawrence and Scarlett Johansen).

Fun fact: Segel and Kermit recorded a video (which can be found online as well) asking Amy to costar. Clearly she accepted, she’s a delight and even dances (and potentially sings, I can’t find confirmation though!)

Now I don’t like to talk about myself, but I think my experience with the Muppets is one people can connect with. Before watching the 2011 movie, I’ve never seen a Muppet adventure in full. I’ve watched the 3D experience at Disney World several times, but that’s about it.

I went into the film with an expectation of disappointment. Which can only mean my reaction is bolstered by that bias. At worst, it’s a good movie, not a great movie.

But I’m writing this review several days later, and even with a level head I believe it deserves all four stars.

It seems to be enjoyable to everyone.

I want somebody to look me in the eye while they proclaim hatred for the Muppets. I’m not sure it’s possible.

So after that heap of praise, let’s discuss what doesn’t work.

I thought the budget was pretty small because, well, they say so in the movie. Fozzie Bear makes a comment about how he’s surprised they could afford an explosion with the budget. (IMDB estimates it around $45M, which doesn’t seem all that shallow to me.)

But when you think about it their machine involves a lot of moving pieces, including a bevy of backup dancers, seat-filling extras, music composition, an orchestral performance (I’m assuming), etc.

And as soon as he said that, I started noticing ways in which they may have cut corners. For example, the ‘muppet man’ gag is oddly poor in comparison to the rest of the film. It’s not painfully long, and the film’s so self-referential, it allows forgiveness for certain weaknesses in the narrative.

The slowest parts of the movie are, as always, any moment focused around Miss Piggy. I don’t care what anyone says, Miss Piggy is by far the most boring Muppet!

She always has been. I don’t understand why this problem still exists. People like to paraphrase to me, “Well, she’s supposed to be played in opposition to the other characters. She’s written to be cringe-worthy.”

Well, okay, that doesn’t detract from my point that Miss Piggy has proven to be boring, regardless of the writing’s intent. Regardless of the source material she’s satirizing, or the dichotomies drawn between her and other Muppets; scenes and music solos featuring Miss Piggy aren’t enjoyable, therefore can’t we cut down on her screen time?

Sorry. That swine really sets me off.

I generally dislike scatological humor. And if you’d asked me ahead of time, I would have agreed with the puppeteers, that Fozzie Bear’s ‘fart shoes’ would be lowbrow.

But they aren’t over-the-top, cheesy or stupid. In fact, it’s one of the funniest gags in the film. Which is exemplary of all the humor in The Muppets: It’s fast-paced and calculated.

The soundtrack, written by Bret McKenzie (famously from TV’s Flight of the Concords) is excellent. Even Chris Cooper’s rap number (which gets glossed over) is good. The best is “Man or Muppet” which is quite brilliant, and fun.

The cameos are thoroughly delightful.

“The Rainbow Connection” is a part I’m roaring to dislike. But I surrendered, there’s some crying involved, I don’t want to talk about it.

Overall, The Muppets is a fantastic movie that doesn’t get its due. Give it a try, and you’ll be glad you did!