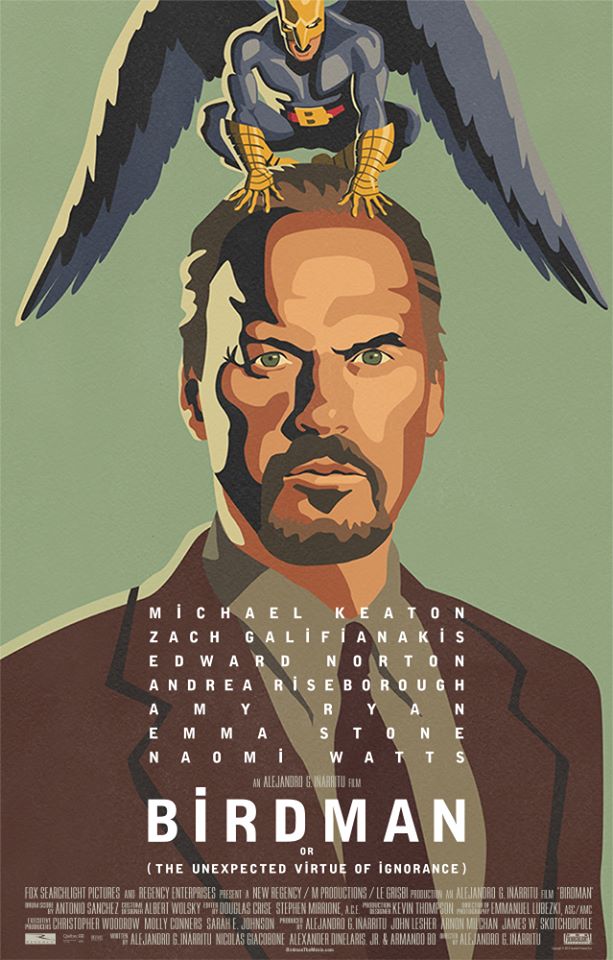 The viewer is a salmon.

Swimming up streams of consciousness, occasionally leaping between parallel tributaries to follow movements of different characters.

Extra thought provoking because the voiceover only chimes in to pester the protagonist.

What’s most noteworthy about Birdman is exactly that: Creative and original storytelling techniques.

Another example is the stylistic editing: The film has the appearance of all occurring within one take.

Therefore the cutting is minimal. Which is incredibly refreshing.

There’s no ‘cut to close-up’ as characters deliver dialogue, which makes for a more organic viewing experience.

(Sidenote: Hollywood should ban the ‘cut to close-up.’)

Birdman isn’t going to be your favorite, but it’s still great.

The writing is strong; the protagonist’s plight is timely and moving. The characters interact compellingly. The subject matter is thought provoking.

Although this term is overused, it takes a ‘gritty’ in-depth look at stage acting.

The metahumor is consistent and pointed. Even the casting is ironic.

She delivers a stellar performance as Lesley; in a role that somewhat calls back to Mulholland Drive, in which she plays a sexually conflicted up-and-coming actress.

Emma Stone is ten types of terrific, but they shouldn’t have spoiled her monologue in the trailer.

Turns out Zach Galifianakis can play off-type extremely well, which comes as no surprise.

Andrea Riseborough is lesser known, but holds her own.

Finally, Amy Ryan plays a totally different character from her role in Gone Baby Gone and fits in perfectly with a slew of other great performers.

Although the trailer spoils most, the special effects are decent enough.

The surreal portion is a welcome addition to the common cinematic experience, and contributes uniquely.

Birdman’s a visual treat, as they say.

People seem to enjoy this flick. After all, what’s not to like?

It’s still in limited release, but you shouldn’t have trouble finding a screening nearby.

Expect a moving dramatic piece about the thespian business and you shouldn’t feel disappointed.

As always, the best advice remains the same.

Be a salmon – expect nothing, and eventually, you’ll feel something.

Resonates nicely with the subtitle, no?

Edward Norton plays a Boy Scout leader who conducts order within his troop in militaristic fashion. The Boy Scouts obviously never organize in this manner, but it’s part of the surreal world the director’s creating in order to build story.

Now. Ed Norton jumping over an impassable expanse with a child in his arms, that’s unrealistic. The act can’t occur in a relatable world, be it satirical or otherwise.

My point is, the director’s on his game when he remains within that surrealistic middle ground. In the frilly, multicolored world of luxe poignancy.

The Grand Budapest Hotel got shifted to the backburner because most reliable sources have given the thumbs-down.

And I won’t go into my reasons here, but there’s always something that keeps them from achieving that next tier.

A great movie is worth revisiting. As much as I admire his talent and efforts, Wes Anderson’s movies just aren’t worth another round for this reviewer.

All that being said, TGBH is my favorite so far. Inspired by the works of Stefan Zweig; it’s plenty captivating to enjoy the entire movie. And it’s not too long, which nowadays, is always good news.

Therefore, beware naysayers. As your brother in nay saying, there’s nary a nay-say for stating.

I’m all too willing to dislike The Grand Budapest, and am delighted just the same.

Perhaps Wes’s flicks are like a new catcher’s mitt; you have to catch a couple stylistic knuckle balls before you’re broken in and ready to absorb a fastball.

[Cause that’s how you break in a catcher’s mitt, right?]

Not only the casting, but also his stylistic choices (including the abnormal storytelling and complex narrative structure) make for a riveting moving picture.

Oftentimes the visuals are simultaneously complex and subtle, with familiar characters peeking into scenes with elaborate scenery and backdrops. The use of various camera angles, cuts and on-screen text all add to the delightful, kaleidoscopic surrealism.

The humor’s heartier and more consistent than usual. The jokes are oftentimes of a less smirky nature, although the irony hits the right comedic notes as well.

The dialogue is excellent, Ralph Fiennes as M. Gustave proves rather proficient at executing the humorous manner of speaking. His timing is calculated and understated. Some of the best jokes are the mid-speech exclamations.

There are too many big names to mention, but Tony Revolori is solid in his breakout role as Zero.

One major nuance I appreciate this time around is the centering of the onscreen action within the scene. It seems the main characters are brought to the forefront of the sequence, each event seemingly set in a vacuum, and spotlights are shined on the primary players.

Quite literally, the lighting is increased around Jude Law, and he even notices the effect.

This in turn adds to the overall feeling of ‘storytelling,’ because that’s indeed the way the characters would interpret it. If Zero were to recall a single memory, such as the moment the train’s stopped, the visual depiction of his mental picture may resemble something like Anderson’s vision.

If this event truly takes place, there’d be the sounds of soldiers searching other train cars surrounding them. The way Zero remembers it includes only the immediate effects it has on him and M. Gustave.

Here’s the thing: I don’t have much bad to say about this movie, because I enjoyed it so thoroughly. It’s my third favorite movie to come out so far this year and I’d highly recommend it for any movie lover.

Of course I’d tell you to catch Noah and Captain America: The Winter Soldier first.

But if you haven’t seen either of those, well, then saddle up your movie horse, compadre.

Go into The Grand Budeho with low expectations (like me), and there’s no way you’ll be disappointed, right?

It’s rated R, how bad could it be?

I suppose the only downside’s no tears were shed.

Especially when the same can’t be said for Moonrise Kingdom.

I often wonder why he kept Ed Norton’s unrealistic leap in that movie.

Perhaps it’s Anderson’s nod to the audience; his method of acknowledging the leap he asks the viewer to take in suspending disbelief.

Perhaps the obvious use of CGI purposely jars us lose of the fantasy.

In which case I say: Good on ya, Wes Andy.