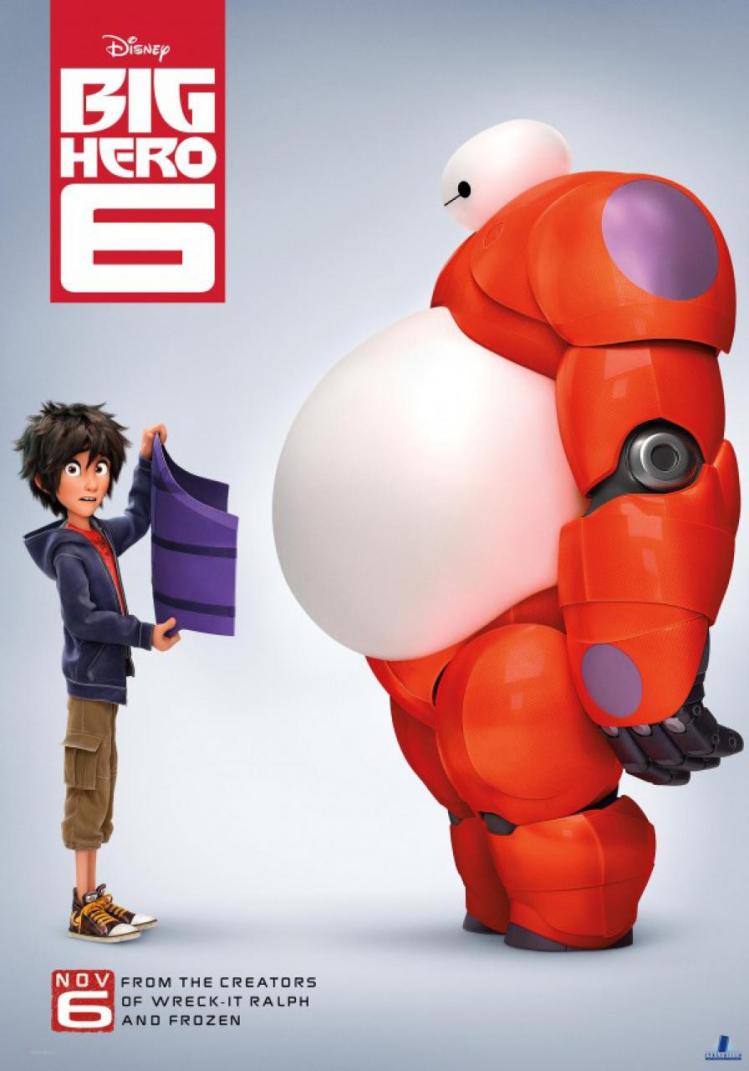 I’ve debated this rating for a week.

The reader may find it trivial, but the temptation to give it 9 stars is strong.

As great as Big Hero 6 is, it’s not as good as Frozen, Brave or Wreck-It-Ralph.

This is a subjective distinction, however. It’s a top-notch animated flick.

The animated short preceding, Feast, is a heartwarming delight.

Which is particularly suited to the full-length BH6, this year’s best animated feature. Unless this reviewer’s unaware of another cartoon slated for release, here’s the final list.

I attended the movie with three friends, all in our mid-twenties. Three males and one female; illustrating thorough enjoyment across the board.

Leading to the conclusion that everyone will enjoy Disney’s latest.

Plus, the group’s in agreement on seeing it in 3D; it only adds to the experience.

The story encompasses a number of elements from science fiction, and tackles the three major themes. Every cinematic trope resonates with classic films.

Baymax is a cuddly Terminator, an anthropomorphic medical bed from Elysium.

There’s no alien life or venturing free of the Earth’s atmosphere (so specifically no outer space travel) or even time manipulation. But interdimensional exploration and wormholes are utilized.

You folks have heard of Interstellar, right? How about Event Horizon, in which a man-made portal between dimensions is constructed?

Anybody remember the in-between realm of Pacific Rim?

Don’t expect any mutation or the development of superhuman abilities, but a completely grounded story of superheroes.

Big Hero 6 derives its greatest strength by constructing a superhero universe, bound by the dictates of humanity’s current understanding of reality.

There are no aliens, because we have yet to prove their existence. There are no superpowers, because no evidence suggests humans have a biological capability for their development.

One scene pays homage to The Hulk and the protagonist’s name, Hiro, seems like a tip-of-the-cap to the TV series Heroes.

In honor of cinematic themes in 2014, the film even features a time-lapse of Hiro innovating in a manner akin to Tony Stark. A digitally animated time-lapse is thought-provoking, at the very least.

People use the word ‘Disnified’ as if it’s a bad thing. The connotation is that something has been purified of all negative emotion, thereby creating an unrealistic product.

The irony in this is laughable.

Disney constructs a highly educated story while exemplifying a preference towards optimism.

Which equates to one of two criticisms.

The action is a little light.

The budget for this movie is $165M, so I was hoping for more elaborate fight sequences.

A final criticism is odd.

In my review of last year’s Frozen, I mention the helpfulness of a non-specific trailer.

The teaser featured dialogue-less frozen pond antics between Olaf (the snowman) and a moose (who never shows up in the actual movie). Therefore the viewer learns nothing specific regarding plot details.

Big Hero 6’s trailer spoils several beats and somehow I failed to avoid another important detail in the first sentence of somebody’s review.

Therefore, let’s chalk up the slightly underwhelmed feeling to the unripe ideas.

After all, the humor is solid and consistent. The characters are likable and original.

Unlike all characters from other superhero team-ups, Fred embraces their engagement with the lifestyle choice. Therefore, he’s a satirical narrator who highlights all of the important moments during Big Hero 6’s origin story.

A sequel is sure to follow. Personally I can’t wait for Big Hero 7, or better yet, Small Villain 5.

Imagine that. A supervillain team-up prequel might be the best way to go.

Although I wouldn’t mind the introduction of a ‘Green Ranger’ trope. Wink.

It distills the complexities of helping a loved one after a tragic loss. It takes a grounded look at the far future, and illustrates the true potential for superheroism.

Expect minor weeping, especially if you’re a softy like me.

Stick around for a number of intriguing bits during the rolling credits. Comic fans, particularly, don’t miss the stinger that follows.

Once again, thanks to Disney, I can add a pleasant memory to the list.